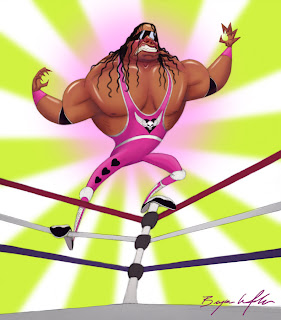 The Avalanche Blog topic for this week was "Hitman". The image came to mind of going home after a long day of work, you drop your keys in the bowl near the door and kick off your shoes all you hear is a whoosh of air. He silently strikes by doing a Flying Squirrel across your living room, slamming his elbow into the tender part of your upper spine and sending you to the ground. You lay motionless on your stain master carpet, wondering if the blood flowing from your ears will come out like the commercial says; hoping that by playing dead the monster might leave. You could only wish to be so lucky. His meaty grip picks your limp body off the ground, Suplexes it back down, and then folds you in half with the Sharpshooter finishing move. All you hear are tendons in your knees and back snapping as you pray that the heavens to "please, kill me now"; and then everything goes black.

I loved WWF. Hulk Hogan, Jake The Snake Roberts, The Bushwhackers, The Undertaker, Andre The Giant, Jesse The Body Venture, Hacksaw Jim Duggan, Rowdy Roddy Piper, Rick Flair, The Iron Scheik, Macho Man Randy Savage, on and on. It was nothing less than white trash soap opera...and I embraced every minute of it. It wasn't so much that I was obsessed with WWF as the fondness of sleep overs, staying up late with friends, eating lots of sugar, and daring not to go to bed for fear of someone farting on your head. Those were the days.

The aspects of wrestling that I loved was when your hero is getting the crap knocked out of him by fist and metal chair, ganged up on and totally out numbered. Then the crowd cheers, the camera pans, and a once enemy comes in and team up with your hero. They beat the living crap out of everyone and then clasp hands, walking around the ring for their victory lap. The crowd was so ecstatic they're almost in tears.

However, what I hated was when that same senario would happen and just as unexpected wrestler switches sides and is running full speed to the ropes the television announcer screams out at the rate of the micromachine man "That's all the time we have" and it was over. It felt like Santa just gave me the greatest gift in the world, then promptly pistol whipped me, and took it back.
Posted by Bryan Lefler at 10:03 AM

This drawing is lovely in a "makes me sick" kind of way, and what you wrote about it makes it even better... and also makes me kind of sick. Nicely done on both counts. I was never much into wrestling, but now I kind of wish I had been... kind of... well, not at all. Still, nice piece here, though.

whooo hooooo nother piece of magic!
Youre my hero Brian!