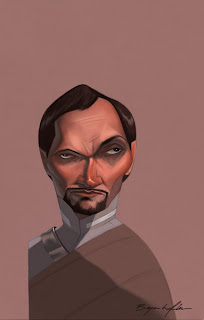 Our work's blog topic was "Dumb Star Wars Characters". Yeah, thanks for narrowing that down for me. What is that, like all but two out of the million characters created for toy marketing campaign that instigated the creation of episodes I, II, and III.

I have a love hate relationship with Star Wars. Love episodes 4, 5, and 6 and loathe 1,2, and 3. However, with that being said you cannot dispute the talented peeps at ILM. The art, design, sound, and effects were solid. Everything else was limp.

As for the picture, there were so many characters I hated that I couldn't choose, so I went the other direction and tried to find a character I could stomach. I figure that Bail Organa probably had less screen time than any of the principle cast so I hate him the least.

This picture was an exercise in using one color and only varying the saturation and value. After looking at it for sometime I'm resigned to think that, sometime in the future, I'm might run into Jimmy Smits and if he's seen this picture he's going to round-house me right in the neck.
Posted by Bryan Lefler at 9:37 AM

This is the coolest... way to dig up one of the most forgettable Star Wars characters for this topic.